Fear thou not; for I am with thee: be not dismayed; for I am thy God: I will strengthen thee; yea, I will help thee;
Isaiah 41:10

Adam became ill on Thursday, January 16, 2003, around 3:45 pm after waking up from a nap. He came into the kitchen rubbing his eyes and saying they burned and hurt. I picked him up and noticed his right eye looked a little swollen. All of a sudden he lets out a scream. A scream like I had never heard before. Painful. He said his eyes hurt and he couldn't see. The next thing I noticed was his gums were red and swollen, bleeding, and appeared as if they were pulling away from his teeth. I picked him up and ran to the telephone, called my husband and told him to get home immediately. By the time he arrived, Adam was acting as if he could barely stay awake, and not quite sure what was going on.

We arrived at the emergency room in Brenham around 5:00 pm and were triaged. Initial diagnosis was the Norwalk virus with dehydration. Around 7:00 pm, after blood work results, and a white blood count of 525,000, we were told he had leukemia (ALL) and would be rushed to Texas Children's Hospital in Houston, Texas. This is when the nightmare began and life changed forever. By 8:30 pm we were in an ambulance. They did give him something to put him to sleep so he would not pull out the needles. Upon arrival (approximately 9:15 pm), a perfectly normal 98 percent oxygen level dropped to 46 percent in front of our eyes, he was shoved into a room and was intubated. By now his head was about three times its size and his tongue was hanging out of his mouth. He looked as if he had been poisoned. His brain stem was being pushed down into his neck his head was swelling so rapidly. Blood began to pour from his nose and mouth. They thought they might have to split his head open to relieve the pressure.

At this point the only thing left to do was to sign life support papers (9:30 pm), because he was living minute to minute. Around 2:00 a.m. the next morning we were told he had a rare leukemia (Acute Myelogenous Leukemia - Subtype 4/5), which affected his brain, spleen, and liver. His chances of surviving this disease were now in the hands of God. A clinical brain test was performed, he did not respond. Brain profusion tests were run around 10:00 am. They showed only a tiny vessel, which was not really blood flow, but legally the doctor could not declare him brain dead until the test showed no vessels lighting up. He remained on life support until Monday, January 20, 2003 at which time a second brain profusion test was run, this time totally dark. We were told there was no more blood flow to the brain. At 11:01 am we chose to remove him from life support. Adam immediately became an angel in heaven with his "Sweet Jesus". Tim, Andrew and I surrounded his bed and covered him with prayer. We took turns holding him and crawled up in the bed and cuddled with him, just as he always loved to do. "Hold me tight", he would say. The room was filled with continuous Christian music as he joined the angels in his heavenly home.

Adam was a student in Mrs. Campbell's Pre-Kindergarten Class at First Baptist Church School and a faithful member of Sunday School. Adam loved music, soccer, and his special doll, Charlotte.

We, the family, would like to extend our deepest thanks to Dr. Lisa Wang and Dr. Doug Meyers, Texas Children's Hospital, Houston, Texas, for giving Adam the best care humanly possible. A special thanks to nurses Randy Bowen, Priscilla Phillips Reid, Julie Kuzin, Wendy Kuiroc and respiratory therapist, Abbey Nelson. You were by his bedside continuously and we know he felt your love. To Bill Riddle, thank you for sharing the word of God with us and Adam. The love we as a family felt from you can never be replaced. Texas Children's Hospital PICU 7th Floor and all who cared for our precious Adam, we thank you and love you. You will all continue to be in our prayers. May God bless you for the love and care you provide for all those critically ill children. You are special people and God knows that. 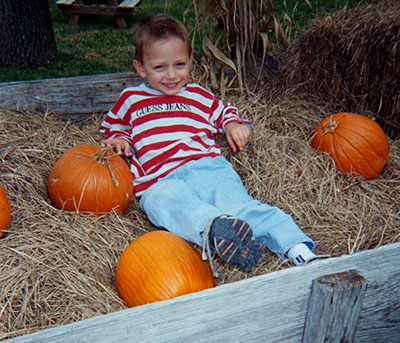 ADAM CHRISTIAN CULLIVER
Who Was He?

Adam, known as "Little Precious" was and always will be our precious son and brother. The joy of our lives. He lived out his middle name "Christian," that he was and will continue to be in Heaven. He only shared 4 years and 9 months with us, which was not nearly long enough. Adam accomplished more in this short time than most people do in a lifetime.

He showed people the love of God. Through him, lives have been changed. He was a witness to many and brought many to love the Lord, our God, ultimately. He was contagious in a way that we cannot even begin to explain. We will always remember your happy, smiling face. Life was always happy and an adventure for you. It will continue to be even more so in heaven. You rest, little precious, for you are in the hands of the Lord. He will take care of you until we meet again in heaven. Thank you for sharing those years with us and thank you for the witness you were here on earth.

Forever in our hearts,
Mom, Dad, and Brother

A song written in memory of Adam by our dear special friend, Jill Louise King.  When Adam became sick on the afternoon of January 16, 2003, Jill began composing a song she wanted to sing to him in the hospital.  She arrived on the morning of January 20, 2003 with guitar in hand, but little did she know that Adam had just "earned his angel wings".  Although she was unable to sing it for him, she did so the day of his funeral and on numerous other occasions celebrating his life in his eternal home.  Thank you Jill and we know Adam hears his song! 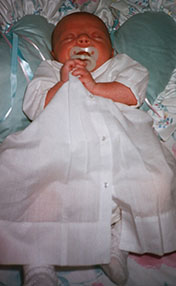 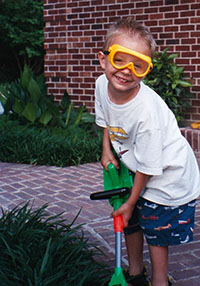 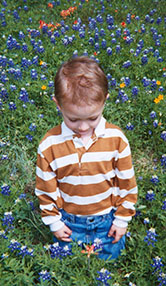 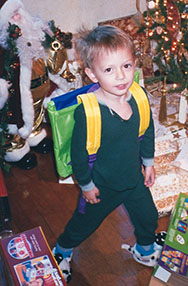 Praise be to God and the Father of our Lord Jesus Christ, the Father of compassion and the God of all comfort, who comforts us
in all of our troubles, so that we can comfort those in any trouble with the comfort that we ourselves have received from God.
II CORINTHIANS 1:3-5